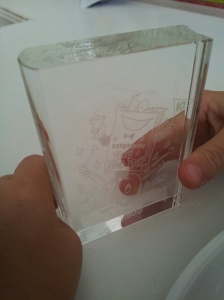 I’d been somewhat nervous about attending the Derbyshire Bookbash.  To the extent that when my son complained he was a bit hot at a fete the previous day I decided it must be heat stroke and I’d be totally irresponsible to leave him.

Needless to say I was encouraged to go (the moment I boarded the train they went to the pub).

The fact that the organiser, Annie Everall, kept telling me how relaxed and fun it was just made me more jittery (like when I tell my kids the dentist would never hurt you).

But to cut a long story – involving hot hotel rooms, gypsy weddings and pints of beer called Hamsters – short, it turned out Annie was telling the truth.

There was cheese.  There was cake.  There were yellow superhero capes with our names on the back!

I watched Ciaran Murtagh’s masterclass proving how easy it is to write a children’s book using just a flipchart and a single page from a dictionary (yeah, thanks Ciaran).  He was hilarious and exhausting to watch and kids and adults alike were rolling in the aisles, (even the mean-looking teenagers in the back row gave up their heckling to laugh along).

Fletcher Moss described how the padlocked poison garden at Alnwick Castle , with its evocative plant names such as ‘Wolfsbane’, ‘Monkshood’ and ‘Old Man’s Beard’ had inspired his teen thriller, The Poison Boy.  Fletcher won The Times children’s fiction competition but worked very hard trying to convince us that he wasn’t much cop as a writer and it was probably all an administrative error.  Needless to say nobody was fooled and we all got our copies of his book signed.  I for one will now be referring to him as ‘my friend, Fletch’.

The apparently gentle and kindly Emma Pass read to us from Acid, her violent, frightening teen novel set in a futuristic police-state Britain.  As we nibbled our custard-creams together over a cup of tea afterwards I must admit to feeling slightly nervous.

As well as up-and-coming stars like Emma and Fletch it was great to meet some established household names, including Jon Mayhew who wrote the fab Mortlock series, and Nick Sharratt of Shark in the Park fame (I wish I’d had time to add ‘who love it because it’s so brilliant,’ to my opening gambit: ‘I’m sick to the back teeth of reading “You Choose” to my kids’).

I chatted a bit about ‘The Hanged Man Rises’ and life in Victorian London – although my entire audience turned up their toes after round 4 of Victorian ‘It’s a Knockout’ so we moved on fairly swiftly.

We all hung around the shop afterwards to sign books and the special 10 year Bookbash anniversary calendar, and the cherry on the cake was that the trains back to London were so sporadic, I got to tour the charity shops of Matlock.

Thanks Annie, thanks to my minder Cathy, great to meet you Emma, Ciaran, John, Nick and Fletch.

See you all again next year.

(And I hope the charming little girl whose sister squashed her finger with a brick makes a full recovery.)